We wish it would be easy for everyone with a desire to be able to come to camp!  Sadly, we realize that many times there is a heavy strain on a budget due to extensive vet bills for a beloved four-footed family member, or extenuating circumstances within the family that eliminates any possible savings for “extras” (like camp.)

The scholarship is named in honor of a Scout who passed away the year before. For the year 2000, the Yogi Mazzenga and Danger Stewart Memorial Scholarship was the first given to a deserving camper.

Submissions for this scholarship are reviewed by the DSA Board of Directors and their decision is final.

If you are unable to attend camp due to a financial hardship created by providing medical care or covering extraordinary expenses for your dog, and you have a dog which you feel is particularly deserving of attending camp, please write us a few paragraphs explaining your situation, and you will be considered for the scholarship. The scholarship includes full tuition for one person with one dog to attend camp ($650. value).

If no qualifying applications are submitted for a particular year, funds will carry over to the following year. Donations for this fund are gratefully accepted!  Many donations that help fund this scholarship are given to honor a special dog who has passed over the Rainbow Bridge.

You can make a donation to the scholarship fund by contacting the DSA treasurer. You can do so as a memorial to a beloved pet OR human. Your memorial will be printed in the newsletter as well as published on the website Memorial Donations page, as a donation to the Dog Scout Camp Scholarship Fund, in loving memory of _____ (your loved one).

A little history on our “founding dogs”… 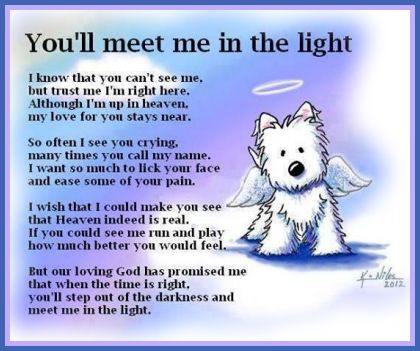 You couldn’t find a more perfect example for a recipient than Yogi Mazzenga. He was our first scholarship recipient. Yogi’s mom, Donna Mazzenga phoned me one day after reading about Dog Scout Camp in a newspaper article. She wanted to know if there was some way that she could attend the camp “for just a few days,” because she couldn’t afford the entire camp stay. She felt it was very important for her boy, Yogi to get a chance to attend this fun sounding doggie vacation before he died, as he was ill with osteosarcoma (a cancer of the bone.) I encouraged Donna to write down her reasons for wanting to come to camp and why she felt she should receive the Mindy Lou Duman Memorial Scholarship.

Her story brought tears to my eyes. Poor Yogi had been stricken by one kind of illness after another, resulting in expensive surgeries and chemotherapies, since he was young. He was only 5 years old, but the emotional and financial strain would have made most “parents” decide to put their pet to sleep. The Mazzenga’s efforts were heroic. They missed work to stay home with their beloved boy, to the point of placing their jobs in jeopardy. Fortunately, their employers were understanding. If ever there was a family that deserved to come to camp with their dog, it was this one.

Yogi attended camp, and had a wonderful time. He met lots of “puppies” and he earned his water rescue merit badge. His parents, Rick and Donna were so grateful for the opportunity for their dog to have a chance to experience this fun adventure before he died. The following year, their finances were not as low, and the family made plans to attend camp again, if Yogi was well enough. They even made a large donation to the scholarship fund. But, as camp time approached, Yogi was too ill, and they had to bail out. Yogi passed away right after camp that summer, bless his heart. The following year we named the scholarship after him, and after another one of our scouts that passed that year: Danger Stewart.

Danger attended camp with her sisters, Jinx and Indy two years ago. Since that time, cancer had taken one of her front legs at the shoulder. She attended camp this past year, and proved that a three-legged dog CAN keep up. She swam in the lake and everything ~ I don’t know how she did it! But, last fall, cancer took her from us, and we honored her, with Yogi, for this scholarship.

And the tradition lives on each year, with the scholarship in the name of a great Dog Scout who is waiting for his parents and friends at the Bridge.